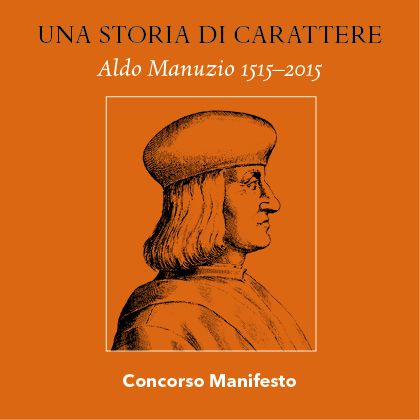 The fifth centenary of Aldus Manutius, the most important Venetian printer, and the 20th of the foundation of Tipoteca Italiana offers an occasion to move a step further in the story of Tipoteca, with the opening of a new exhibition hall and a new auditorium.

To celebrate these upcoming apointments, Tipoteca would like to announce a project called A Story of Character. Aldus Manutius 1515-2015 in order to spread the knowledge of Aldus through plural voices. Among the different initiatives, the poster design competition represents the opportunity for graphics designers and artists of all the world to express the influence of Manutius in the contemporary world.

Participation in the poster design competition A Story of Characters. Aldus Manutius 1515-2015 is limitless and open to graphic designers and artists from all countries. The theme of the competition is the design of a poster (size cm 50×70 H) with both digital and analogic techniques.

To participate in the competition, all the applicants must fill in the form (download it from www.tipoteca.it).