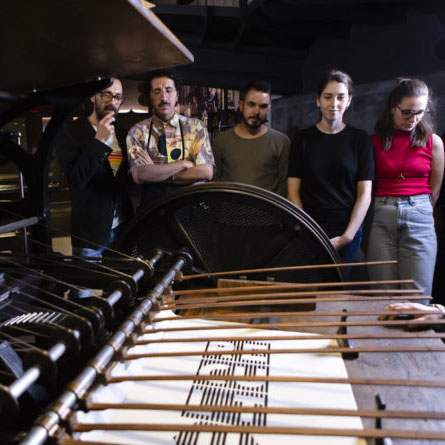 After the extraordinary edition devoted to the Bauhaus character and leading to the digitization of five characters from the Dessau School archives as part of the school’s first centenary (1919-2019), Adobe took an interest in the Tipoteca collection to give new life to typographical elements, symbols and ornaments born in a historical period – the first decades of the 20th century – among the most innovative and avant-garde in the development of typographic design.

In Spring of 2019, the p98a.berlin design team, led by its founder Erik Spiekermann, selected wooden characters from Tipoteca’s extensive collection based in Cornuda and made printing proofs with the original characters. Berlin typographer Ulrike Rausch has painstakingly redesigned the alphabets, developed the character range, and added stylistic variants and other OpenType features.

At the end of this research journey, on Friday the 27th of September, the Adobe team organized a typographic printing workshop in Tipoteca with Erik Spiekermann, bringing together the six young designers of the creative competition launched the previous month to stimulate dialogue between the analog and digital worlds.

The new digitized characters – called “The Tipoteca Series” – are now available on the Adobe Fonts website and are a living testimony to the close relationship between design and typographic culture: creativity, to be appealing and understood by everyone, must be inspired by the visual language of the past, while maintaining solid roots in the history and culture of design.